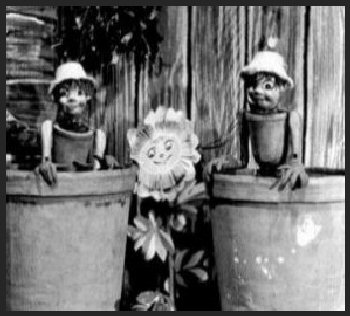 1.The Flower Pot Men was a puppet show shown on the BBC in the fifties.

4.The language spoken by the Flower Pot Men was known as 'oddle poddle'. Prince Charles and Camilla often speak oddle poddle in their intimate moments.

5.Little Weed was in fact a flower not a weed but the Flower Pot men took too long to say Chrysanthemum.

6.Alan Tichmarsh was inspired by the Flower Pot men to take up a career in gardening. Previously he was intending to become a dope fiend.

7.The gardener (always off-screen) was played by Bert Kwouk. The reason why British people in the fifties and sixties thought that all Chinese people looked the same was the only Chinese person they ever saw on the telly was Bert Kwouk.

8.The Flower Pot men were deeply distressed when Serbian leader Slobodan Milosevic died in 2004. He was the only major European leader whose name they could pronounce correctly: Flobalob Flobalobovich.

9.The Flowerpot Men had a hit single 'Let's go to San Francisco' in the sixties (Chorus line 'Flob-a-Lob, Flob-a-lob, Flob-lob-a-cisco') but they foreswore the high life in general although they did move to slightly bigger flower pots.

"Flob-a-lob-a-lob" meant prepare your weapons and begin the class struggle against the splittists and their quasi-socialist lackeys.