THE REJECT LETTERS
Not many people know this, but many struggling artists, before they became famous, had to endure numerous rejection letters from galleries around the world who failed to recognise their genius. Luckily most of them were barking mad and too busy chopping their own ears off to notice.

Thanks for your picture. Frankly there's not a lot of call for pictures of people being miserable on bridges these days. In these worrying times, with Brexit and stuff, people want to be cheered up a bit and not go round screaming all day. Mrs Fepps tells me that Swedish people like being miserable – something to do with the fjords apparently. Perhaps if we had some ducks in the background, or a sailing boat, you know, something a bit more cheerful. 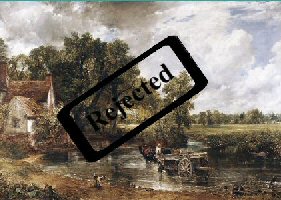 Thanks for your latest picture. As always we have to say that it’s all a bit ‘chocolate boxey’, don't you think? We attach the address of Huntley and Palmers. Perhaps you’ll have better luck with them. By the way, Mrs Fepps thinks your picture is historically inaccurate – it’s barges that went along the rivers, not carts. 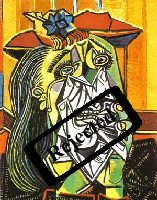 Oh dear, you’ve got it all wrong again. Before you send us any more pictures we suggest you avail yourself of one of the evening art courses in your area which will help you with getting the nose the right way round and the eyes in the right place, etc, etc. For a while we thought it was one of those ‘Magic Eye’ pictures. Mrs Fepps thought she could see a 3D fish, but no one else could see it, even though we stared at it for hours.

We liked this picture of Mr and Mrs Andrews but thought perhaps next time you could chose some people who are a bit more ‘normal’ looking. Also there’s a lot of irrelevant trees and fields on the right. To help you out we have chopped this bit off and thrown it away. I think you’ll agree the picture’s much better now, although we still can’t use it. 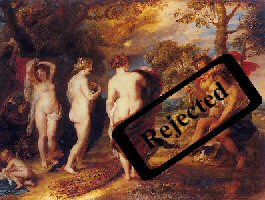 Thank you for your latest picture but we must say once again you have chosen fat nude women as your subject. In these days of obesity and other health scares we need to be more responsible in what we portray so can we suggest that in your next picture you go for women who are a bit thinner. Mrs Fepps suggests your models might like to try Weight Watchers. Have a word with Mr Lowry who is very good on very thin people. 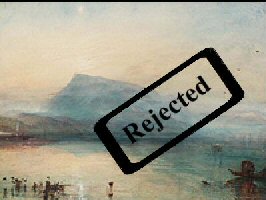 Thanks you for your latest landscape which seems to be of a big blue smudge thing with some funny squiggles in the foreground. What we would suggest is not to paint when it's all misty or foggy. Go out on a nice clear day and then we’ll get a proper picture instead of all this blurry stuff. Mrs Fepps thinks you might have cataracts. She says you should have gone to Specsavers. How we laughed. 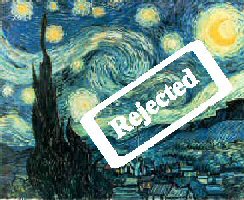 Dear Mr Van Gogh, or may we call you Van?

I must tell you, we’ve just been having such a laugh about the ear business. Mrs Fepps was saying wouldn’t it be funny if you met a constable in the street because he wouldn’t be able to say ‘Ear, Ear, What’s all this then?’ He’d just have to say ‘Ear, what’s all this then?’ which wouldn’t be half so good. Anyway the painting is crap - when did you ever see stars that big? I mean, what are you, 10? 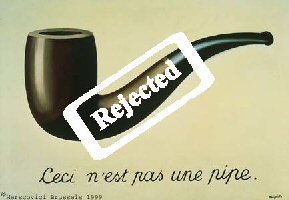 Mrs Fepps says your French translation is not quite right. It should be ‘Ceci est une pipe’. Also it’s a bit insulting to our customers who are quite capable of working out whether it’s a pipe or not. Mr Rubens doesn’t write ‘This is a fat nude woman wrestling with a swan,’at the bottom of his pictures does he? - he lets the viewer work out what’s going on for himself.