WHY I HATE STAR WARS.
Once upon a time in a galaxy far far away there was a delightful little film called Star Wars based on Saturday morning serials, with primitive but effective special effects, funny characters and some rusty but nippy space vehicles - in sharp contrast to the slow and sterile ones in 2001:A Space Odyssey. Space ships loomed overhead and plucky pilots weaved in and out of danger, with a whooping audience close behind. Star Wars, along with Jaws, kicked off the idea of the blockbuster movie, rebooting cinema following ten years of decline when many cinemas were converted into bingo halls. 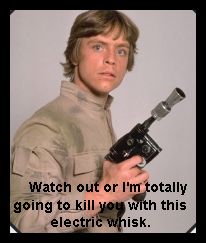 Star Wars was often voted the best film of all time in the nineties and the noughties by fans, for whom the film was a stunning introduction into the possibilities of the cinema experience. It was later overtaken by The Empire Strikes Back which is still described as the best sequel ever made.

Like everyone else, I loved Star Wars, apart from the rather shonky ending which worryingly resembled a Nuremberg Rally. I was less keen on The Empire Strikes Back maybe because, in the Odeon where I watched it, they appeared to have applied piles of cotton wool to the speakers so I was unable to absorb the wise words of advice, and tortured syntax of Yoda as he introduces Luke Skywalker to the ways of The Force.

Return of the Jedi seemed to be quite fun but the cute teddy bears roaring about on hover-bikes did not go down well with with the aficionados who were increasingly taking the whole Star Wars saga very seriously. For them, the revelation that Luke Skywalker was Darth Vader's son was the greatest revelation since Jesus strode across the Sea of Galilee without the merest hint of inflatable shoes.

George Lucas who had taken an enormous risk with the first film now could do no wrong and he began working on yet another trilogy of films as producer writer and director. The problem was that he wasn't much good at narrative, couldn't create believable characters – including the execrable and probably racist Jar Jar Binks - and certainly couldn't write dialogue. Trilogy 2 was a turgid affair with lots of people explaining the plot to each other between little bursts of action to ease the boredom.

George Lucas' special effects offshoot learned to animate virtually anything George could imagine. Scenes looked more convincing but somehow less interesting. In fact the more the effects were CGI'd the more they resembled 3D cartoons. The plotlines were confused which was probably just as well because otherwise they might have revealed that the person who wrote them was equally confounded. Star Wars continued to make shedloads of money, but even die hard fans were beginning to lose a little of their enthusiasm. 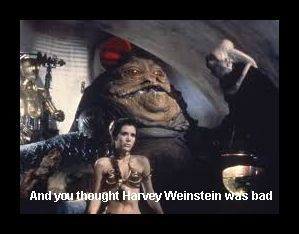 Disney and JJ Abrams came to the rescue with the third trilogy where new characters – especially Daisy Ridley - seemed to invigorate the franchise. Offshoots began to appear, and ideas were mix and matched in the same way as they were in the Xmen and Marvel superhero sequels.

So we come to Star Wars: The Last Jedi. Spurred on by a five star revue in The Times and 93% approval on rottentomatoes, I managed to squeeze into a packed cinema to revel in the latest Star Wars Christmas hit. What could possibly go wrong? I should have known something was up when I found myself bored with the scrolling text receding into the distance and had to struggle to read it all before it disappeared off the top of the screen.

Then we were straight into a great space dogfight - always the highlight of the films. But I was instantly put off by the dialogue. My feeling is if you hear the expression “Copy that” many times, you are in shonky screenplay territory, with words written by people whose experience of life comes largely from watching films. I also noticed a bad guy saying “Excellent”, a universal indicator that suggests you're watching a dog.

Then I began to realised how much I've come to hate Star Wars. George Lucas always said he was going make three trilogies in which the only common characters would be R2D2 and C3PO. One, if you don't know, is a squeaking dustbin and the other is an irritating wimp who wanders about whining about stuff happening around him. I've seen Peter Crouch do a more convincing robot.

In Star Wars 1 (I refuse to participate in the retrospective renaming which reveals precisely nothing) there was a funny little scene in a cantina with all sorts of weird and wonderful creatures. Now we have an entire Las Vegas casino filled with space freaks, And do you know what, not one of them looks like a tenable living object, no matter how many eyes on stalks it has sticking out of the top of its head.

We also encounter many other adorable creatures with big eyes, that squeak and blink, who have nothing to do with anything, and which we're presumably supposed to find cute and endearing. Perhaps one day they'll put them all in a shooting range so I can blast the little bastards' heads off. 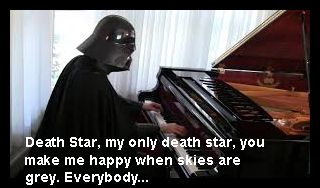 I'm glad that Chewbacca (or Chewy as we must call him, apparently) is back. What chewy does mainly is to stand about making stupid noises. Sign him up for another ten years I say.

We must also not forget the white plastic coated stormtroopers. We are, I believe, suppose to find these guys terrifying. All they ever do is rush about, bang their heads on things and get blown up. They are about as frightening as a My Little Pony (who I always think is a bit sinister anyway)

In The Last Jedi, hours are spent on people who can't quite decide what to do. I admit, Hamlet took longer, but he had a better screenplay. Luke Skywalker must decide whether to remain as a hermit on the island, or come out and face down the Empire and save the rebels. I won't spoil the the ending by even hinting at the outcome of that dilemma. Meanwhile Kilo Ren is toying with joining the dark side. Hint: he's got a big scar down his face. Another hint: Old rubber face has been chopped in half so we don't have any other big villains to step up for the grand finale. Again I won't spoil the plot. It's bad enough already.

Finally I have to question what exactly Star Wars is actually about. All we ever see is The Empire trying to destroy The Rebels and The Rebels pluckily fighting back. We know the rebels are fighting The Empire, but what exactly are they trying to achieve – a socialist state under Obi-Wan Corbyni perhaps. The truth is we haven't the faintest idea. It is true that, at one point, the Empire created the Death Star which went about destroying planets but how do we know that's not a good thing. I mean Venus. What's the point of Venus? It's just a big ball of hot gas. Maybe the solar system would be tidier without it.

If you thought Syria is confusing, Star Wars is an entire universe full of people rushing about trying to kill each other. The only thing I can discern is the rebels are the good guys because their ships are smaller and rustier. I'm not sure we should base our moral judgement on the basis of equipment size. Maybe if we wiped out the rebels, the Empire would stop building death stars and settle down to a life of being only marginally unpleasant.

I'm afraid to inform the many hard working people at Disney that I will never go to the cinema to watch any more Star Wars tripe, just as I vowed never to watch another James Bond film after the worst special effects ever in Moonraker. Han Solo is dead so I won't even miss Harrison Ford's increasingly futile attempts to shape his face into a genuine smile during the happy endings.

I will however go and see other films starring Daisy Ridley, so I'm hoping she dies in Trilogy 3 Episode 2 and goes like Luke Skywalker to a quieter place where she can star in small independent films in French about people who are vaguely fed up with their lives. Perhaps she can use the Force to cheer them up.